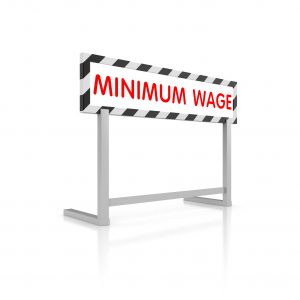 The current session of the House of Representatives has grappled with this issue but there is little hope, at this time, of it coming out of committee in the Senate.  But this 10-year drought has not gone unnoticed in most states.

As of 2019, 29 states, plus the District of Columbia have a higher minimum wage than the federal.  14 states are equal, 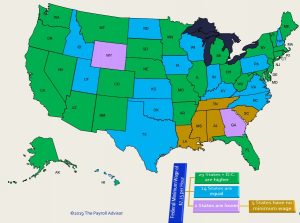 2 states are lower, and 5 states still have not enacted a minimum wage. In addition, many “high cost” cities or counties have enacted their own minimum wage different from the state level. This includes at least 27 cities in California; New York City; Chicago, IL; Minneapolis, MN; four counties/cities in New Mexico; three entities in Washington state; two counties in Maryland; and Portland, ME among others.

The growing trend among the states is to link the minimum wage to the Consumer Price Index. At least 12 states, including AZ, CO and NV, have used this method to ensure that the level of the minimum wage keep up with inflation in their own state.

With 2020 just around the corner, the states are already announcing increasing to the minimum wage. These include South Dakota, Vermont, Montana, Ohio and Connecticut. New cities or entities are also adding a minimum wage for the first time, including Houston airport area in Texas and the city of Novato, California. (Be sure to subscribe to our payroll update news service, Payroll 24/7 to keep up with the latest minimum wage increases for 2020).

But how does the United States stack up against the other industrialized countries. Well taking currency adjustments into account, we are quite a bit lower on the national level.  Even with higher costs of living most cities or countries come in higher than we do. They generally range from $10 an hour to $13 an hour in U.S. dollars. However, this does not take into account that citizens in those countries also have paid for medical care and do not have to pay for health insurance out of that minimum wage in most cases.

Upcoming payroll lectures:  Our next payroll lecture is on the 2020 Form W-4.  Be sure to join us on October 30, 2019 as we review the massive changes to this form in decades. Get a free 60 day subscription to Payroll 24/7 if you register before October 23rd.