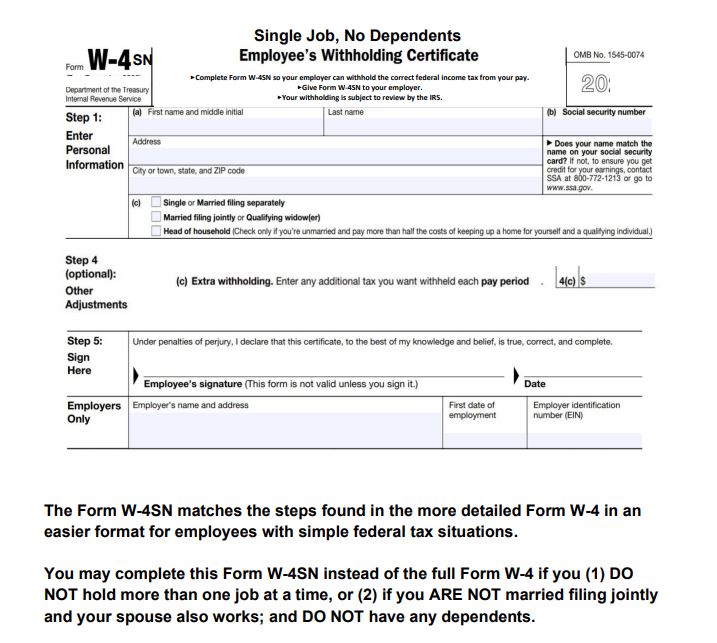 The American Payroll Association has sent a letter to the Internal Revenue Service (IRS) recommending that the IRS create a new and separate W-4 form for employees who have a single job and no dependents.  The form, Form W-4SN, Employee’s Withholding Certificate — Single Job, No Dependents, would be used by employees whose situation would allow them simply to complete Form W-4, Employee’s Withholding Certificate, Steps 1, 4(c), and 5.

As most payroll professionals know, employees continue to struggle with completing the Form W-4 in its current form.  They find it difficult to understand the instructions and many times complete the form in error or in a manner that makes it invalid and cannot be processed by payroll. The APA believes that a simplified version using Steps 1, 4(c), and 5 can be implemented effectively for improved accuracy and without creating confusion for employees.

The APA worked with the IRS during the initial stakeholder engagement for the 2020 Form W-4 and a simplified version of the form was discussed back then. However, it was rejected because of the complications of programming and tracking. The new recommended form maintains the same lines and boxes as found on the current Form W-4. This eliminates the original issues with programming and tracking.

The APA attached a sample of the form W-4SN to help explain its recommendations.

The APA is recommending a six-month effective date to allow for payroll software adjustments, payroll training, and employee awareness.

What do you think?  Let us know your opinion of the recommended form in the comments section.

About the APA: Established in 1982, APA is a not-for-profit association serving the interests of more than 20,000 payroll professionals nationwide. APA’s primary mission is to educate its members and the payroll industry about best practices associated with paying America’s workers while complying with applicable federal, state, and local laws and regulations. APA members are directly responsible for calculating wages and employment taxes for their employers.