Individuals named as responsible party must have either a Social Security Number (SSN) or an individual taxpayer identification number (ITIN). The IRS is making the announcement now to give entities and their representatives time to identify proper responsible officials and to comply with the new policy.

This change is part of the IRS’s ongoing security review. It provides greater security to the EIN process by requiring an actual individual to be the responsible party and improves transparency. If the employer needs to change the responsible party, it can complete the Form 8822-B, Change of Address or Responsible Party within 60 days of the change.

Entities such as federal, state, local or tribal governments are exempt from the responsible party requirement, as is the military including state national guard units.

The U.S. Department of Labor (DOL) announced on March 14th, that they had released new opinion letters on their website.  These letters address the compliance issues related to the Family and Medical Leave Act (FMLA) and the Fair Labor Standards Act (FLSA).  Before we review the new opinion letters for the FLSA, let’s do a quick review of what exactly is an opinion letter.

The Wage and Hour Division issues guidance primarily through Opinion Letters, Ruling Letters, Administrator Interpretations, and Field Assistance Bulletins. They are provided on the DOL website.

An interpretation or ruling issued by the Administrator interpreting the Fair Labor Standards Act (FLSA), the Davis-Bacon Act (DBA), or the Walsh-Healey Public Contracts Act (PCA) is an official ruling or interpretation of the Wage and Hour Division for purposes of the Portal-to-Portal Act. 29 U.S.C. § 259. Such rulings provide a potential good faith reliance defense for actions that may otherwise constitute violations of the FLSA, DBA, or PCA. Prior rulings and interpretations are affected by changes to the applicable statute or regulation so an employer should always periodically review any relevant opinion letters that it uses as a basis for a policy to ensure that changes have not occurred. From time to time the DOL updates its interpretations in response to new information, such as court decisions, and may withdraw a ruling or interpretation in whole or in part.

Now on to the new letters just recently issued.

FLSA2019-1:  This opinion letter clarifies the FLSA wage and recordkeeping requirements for residential janitors and the “good faith” defense. Discusses what to do if the FLSA and state requirements do not match. In this case the state of New York did not consider the employee subject to minimum wage and overtime but the FLSA does.

FLSA2019-2: Addresses the FLSA compliance related to the compensability of time spent participating in an employer-sponsored community service program.

I always encourage employers to use the opinion letters when formulating policy.  If you don’t see an opinion letter that addresses your issue, you may ask for one to be issued on that policy or question by submitting the request online.  Of course, not all requests submitted result in an opinion letter being issued. Or it may be issued but as a non-administrative letter which holds less weight. But it doesn’t hurt to ask!

On March 7, 2019, the U.S. Department of Labor (DOL) issued a news update concerning the new salary levels for employees to qualify for the Executive, Administrative, and Professional exemptions under the Fair Labor Standards Act (FLSA).  The news update acknowledges that the currently salary level of $455 per week, in effect since 2004, needs to be increased but not to the

level that was required by the Obama Administration in 2016 ($913 per week). The Department is proposing to adopt a salary level that uses a clear and predictable methodology for employees and that will also comply with the FLSA and the recent court decisions concerning the Obama Administrations regulations that were invalidated by the United States District Court for the Eastern District of Texas. The rule was submitted on Appeal to the United States Court of Appeals for the Fifth Circuit but was being held in suspension.

This rulemaking proposes to rescind the 2016 rule formally and replace it with this current rule. The same methodology is being used as in the 2016 rule.  The level is set at approximately the 20th percentile of earnings for full-time salaried workers in the lowest region (South). Applying the 2017 data and projecting forward to January 2020 (when the rule should be effective) this results in a proposed standard salary level of $679 per week or $35,308 per year. However, the Department anticipates using the 2018 data in developing the final rule.

One holdover from the 2016 Obama Administration rule is the ability to count nondiscretionary bonuses and incentive payments (including commissions) to satisfy up to 10 percent of the standard salary level test.  These bonuses must be paid annually or more frequently. The new rule will incorporate these types of bonuses.

The DOL is not proposing any changes to the standards duties tests at this time.

For employees who are exempt under the Highly Compensated Employee test, this level will be increasing as well.  The 2016 rule increased that $100,000 threshold to $134,004.  This new rule, using the same methodology of the 90th percentile for full-time salaried employees nationally as the 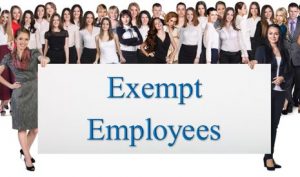 The automatic updates contained in the 2016 rule will not be adopted.  Instead the DOL proposes to update the earnings thresholds every four years to prevent the levels from, once again, becoming outdated.

The DOL is now conducting a 60-day comment period on the new rule.  Click here to read the new proposed rule.  The address to comment is on page 2 of the report.

We will see where the rule stands after the 60-day comment period. Until then we just wait…

I invite your comments… what do you think of the new level?